Roslyn Cristiano Payne died on May 21, 2019, at the age of 78. A resident of Richmond, Vt., she died at home holding the hand of her daughter, Sierra Payne. During the last few years, Roz suffered from dementia. She left this Earth in the town where she felt most comfortable and had spent most of her adult life.

Roz was born in Paterson, N.J., on October 25, 1940. Her parents were Jimmy Cristiano, an Italian immigrant, and Edith Berkman, a Jewish immigrant from Russia-Poland. Jimmy and Edith were lifelong Socialists. Jimmy ran for mayor of Paterson on the Socialist ticket, and Edith was dubbed the "Snarling Red Flame" for her participation and arrest in the Lawrence, Mass., mill strikes of 1931. When Roz was young, the family moved to Los Angeles. She married Arnold Payne, a Venice Beach "body builder." She later married Serge Ernandez of New York City, the father of Sierra. After graduating from University of California, Los Angeles, Roz moved to New York City and earned a master’s degree at Columbia University, where she became involved in the radical student movements. She took part in the student strike at Columbia, occupying buildings in protest of the Vietnam War and in support of the black students. The protest convinced her that political action was her purpose in life. That realization put an end to her stint as an elementary school teacher, during which she said the kids called her "Mrs. Pain in the Ass.”

Roz became a member of the Newsreel Collective, which made films about political activists and issues. She helped produce films about women's liberation struggles, Black Power and the Black Panther Party; she helped chronicle student strikes and protests. The films had titles such as “Off the Pig” and “Amerika.”

In the ’70s, Roz moved to Vermont. Neighbors described her and her comrades as "hippies," but she described herself as a "politico." She lived communally in Putney, where members shared their wealth and resources. In the children's commune led by adults and adolescents, the idea was to change the nuclear family with its notions of biological parental control to a community of adults living with kids. Jesse Drew, now a professor at University of California at Davis, was 15 and a runaway who came to Vermont. Roz was his “guardian angel."

In Richmond, Roz lived her cooperative principles, offering showers, food and shelter to friends who were homeless or hungry. She offered support and care to people in prison — especially those incarcerated for politics. She was an inveterate mushroom gatherer, and you could always find her out in the woods hunting magical and edible ’shrooms. She had a great garden. She had fabulous gatherings and May Day parties to celebrate International Worker's Day.

In Richmond and in Burlington, Roz helped to form the Free Vermont movement of communes and free thinkers; she contributed to the founding of the Onion River Co-op, now City Market in Burlington; she helped organize the People's Free Clinic, now the Community Health Center; she supported the Vermont Women's Health Center, which offered safe and legal abortions in Burlington. Roz went in to get her blood drawn — and became the first patient — when it opened in 1972.

She engaged in local politics in Richmond and participated regularly in town meetings. Unpredictably, Roz was elected to and served as town constable, one of the town’s local law enforcement officers. She was always civically engaged. She helped elect Bernie Sanders as mayor of Burlington in 1981;  she worked in the law office of Sandy Baird, where she compiled archives and files to chronicle counterintelligence activities on the part of the FBI against Black, radical and liberal movements.

In her later years, Roz remained a talented filmmaker. She produced a well-received DVD collection, What We Want, What We Believe, a tribute to the Black leaders of the ’60s and ’70s, the Black Panther Party and other activists. Roz was a unique woman who nudged “the arc of history which bends toward justice,” to quote the words of Martin Luther King Jr.

Roz is survived by Sierra and her granddaughter Del, 13. Roz is also survived by her extended family, Jane and Rain Kramer, and her many colleagues, friends and comrades. 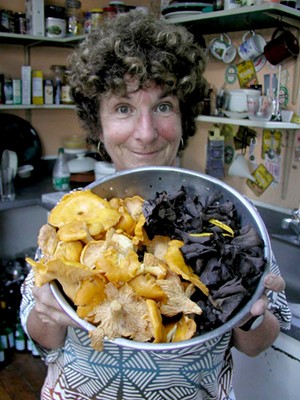 A memorial service will be held on June 22 at 1 p.m. at Main Street Landing in Burlington.