Phyllis Rochel Litman was born on September 30, 1938, at the Beth Israel Hospital in Newark, New Jersey, the daughter of Matthew and Rose (née Schiffman) Litman.

At the time of her birth, her father was a mattress salesman in Newark, New Jersey where Phyllis went to school through high school. Phyllis survived whooping cough at age 5 by spending 6 weeks at a sanitarium in the countryside. Her earliest memories include writing a poem “Down in the Valley” and of being told at the age of five that she had killed Jesus Christ, because she was Jewish, while rocks were thrown in her direction by students from her school.

She was an engaged learner and insisted on reading and writing despite being warned by her Jewish mother that she wouldn't be able to get married if boys thought she was too smart. She looked up to her older sister Pauline and adored her younger brother Joe.

At 14, horrified by the Nazi Holocaust and the intolerance within her own society, she was already a radical feminist. She refused to wear make up and was learning about the exciting experiment of kibbutzim in Israel as a member of a Jewish Zionist organization. Despite her parents frowning upon the idea, she went to live on an Israeli kibbutz at age 16. She had a romantic affair and was engaged to a now-renowned Palestinian-Israeli journalist in 1956. However, when confronted with having to convert to Islam, Phyllis thought her mother would have a nervous breakdown and she broke off the engagement.

After commuting to NYC on weekends to engage in political activities for a time, she got a job doing secretarial work and moved to Manhattan. Phyllis learned to type and do shorthand in high school and could type more than 100 words a minute. You can still see this influence in her handwriting to this day.

With this skill she began typing papers for students at Columbia University and then a series of secretarial efforts that lead her to the National Committee for a Sane Nuclear Policy, where she became the “Executive Secretary”, which was code for a female office manager, in 1958. After the House UnAmerican Activities Committee nearly shut down the organization she was working for, she was fired for attempting to organize a workplace union with her colleagues. She enrolled at Columbia University for a year in the fall of 1958, going to evening classes until she ran out of money. When she asked her parents for assistance to continue her studies, her mother Rose insisted that she had to help her son Joseph instead.

During the winter of 1960, with the Cuban revolution still fresh, she traveled to that island nation to see for herself what was happening there, and almost stayed after falling in love with the Cuban people and their enthusiasm for building a future on their own terms. She decided instead to return to the U.S. to tell the truth about the revolution she saw first hand and joined the Fairplay for Cuba Committee.

While office manager at Sane Nuclear Policy, Phyllis hired Carol Schmitzer. Carol and her husband, George Larrabee were married by Unitarian Minister Alan Sawyer. In 1963, Carol and George introduced Phyllis and Alan over dinner at their apartment in Manhattan. After a walk around the neighborhood they fell in love and were soon on their way to Washington, D.C., for the March on Washington for Jobs and Justice on August 28, 1963, where Martin Luther King, Jr. would give his now famous “I Have a Dream” speech. The new couple was soon pregnant and married, living in Springfield, Massachusetts where Minister Sawyer had engaged in a civil disobedience campaigning against Woolworth’s for not integrating their lunch counters in the south and subsequently was voted out his church for his activities.

Their son Frederick was born in June, 1964, and soon afterward the family moved to Boston to become active members of the Boston Chapter of the Socialist Workers Party. They actively engaged in electoral campaigns to get their colleagues into office by standing on street corners, talking to passersby and obtaining signatures to get on the ballot.

Living in the public housing projects of Roxbury, Massachusetts, they raised their young son and engaged with the Black Nationalist Movement and the early days of the movement against the war in Vietnam. Great fans of Malcolm X, they were shocked, but not surprised, when the Minister was gunned down with bullets supplied by the FBI.

Phyllis, then seven months pregnant with her son Malcolm, was uncomfortable living in the heart of the fear and anger of the national tragedy of the assassination of Martin Luther King Jr., so the family moved to an Italian and Irish working class neighborhood in Somerville. Malcolm was born in June of 1968.

Phyllis had begun to writing poetry again after she met Alan Sawyer, yet it wasn’t till the early 1970s, as she got involved with the feminist consciousness-raising movement and joined the Bread and Roses Collective (publishers of the 1970s classic, Our Bodies Ourselves) and Boston Women United, that she began to take poetry seriously. Phyllis co-wrote many periodicals about the ideas behind the second wave of feminism as it’s often called, from the late sixties until about 1974. In 1974, the Stone Soup Poetry Society, run by Jack Powers at the time, published Phyllis’ first poetry collection, entitled “Old Leaflets for Shopping Lists and Rashly Written Poems – Stone Soup #23.” It even received a short review in the New York Times. Stone Soup also published her second collection, her first of Vermont poems in 1975, “Cream of Red Pepper.”

In Somerville, Phyllis studied auto mechanics and taught 4-H Club cooking classes to children. Alan was employed as a machinist working for the Boston Shipyard, Dixie Cup and wherever else he could obtain work, simultaneously selling “The Militant” newspaper and rabble-rousing to get the union he was a member of, to act more powerfully. Alan was fired, beaten and arrested for his activities, often leaving the family to live on welfare and government surplus food.

The first week of July, 1975, brought Phyllis and her two young sons to Vermont. Alan had reverted to the alcoholism that had destroyed his first family and was seriously threatening Phyllis’ children with violent behavior. A Stone Soup friend had decided to live at an alternative community in Rochester, Vermont, where they said “the women were treated like goddesses and the children like saints”, and Phyllis thought that might be a safe place to retreat to. The kids loved the community and they all decided to stay.

The boys were homeschooled and learned to swim, play guitar, studied French and German, ski and snowshoe, compose music, write and perform radio plays that were performed at Goddard College and enjoy their youth amongst friends and the seasons in the forest. Phyllis became interested in plants, studying botany, drawing and painting them – and continuing to write poetry, stories and plays. She built a dulcimer with Jeremy Seeger, Pete’s cousin, and learned to play. She wrote a lovely tune she called, Silver Mountain Sky, about the joy of life and love in Vermont.

Phyllis had begun her studies at Goddard College in 1980, which later sold her adult degree program, then known as GEPFE, to Vermont College, which in those days was a part of Norwich University. Phyllis decided to finish her studies at Johnson State where she graduated with a BA in 1982. After many wild, creative, exciting and often chaotic times associated with communal life, Phyllis and Malcolm moved to Burlington, Vermont, so that Malcolm could attend an alternative high school there in 1983. Frederick was already studying at Johnson State.

Soon Phyllis and George would meet again and begin dating. By 1986, they were living together in Cabot and in 1989 they were married at the former Yett farm on Middle Road in Plainfield where they lived until about 1999.

They eventually bought the house that George still lives in, on Greenwood Lake in Woodbury. After nearly three decades of marriage Phyllis decided that she wanted to die as a “free woman” and moved to Greensboro in 2017. In 2018, she divorced George. She was relieved. He was heartbroken.

Phyllis found a wonderful apartment in Greensboro along with a dedicated community of friends, many associated with the Greensboro United Church of Christ. A dedicated Marxist-Zionist much of her life, she identified as Jewish and became very involved in the Jewish Community in Vermont, particularly with Beth-Jacob Synagogue in Montpelier.

Phyllis was passionate about peace and freedom, women’s liberation, and her relationship with Mother Earth, Native and African American and Palestinian rights. “We are all created equal”, was her credo. She loved singing, reciting poetry, writing in journals and comedies with her son Malcolm, drawing, painting, dancing, singing, keeping up with current events, hiking, snowshoeing and gardening, foraging for wild foods and medicinal plants. She was an advocate for natural healing modalities, such as herbalism, acupuncture and network chiropractic. She was witty, smart, kind, and loved to tell stories and make fun of everyday life. Phyllis acted literally, as if every day was a poetry reading. As her friend Gail Ruggles reminds us: Her trademark phone call began, "I've written a new poem; shall I read it to you?"

Phyllis was predeceased by her father, Matthew, her mother, Rose, her sister Pauline, her brother, Joseph, her Aunts Betty and Shirley, her cousin Mark Murzin; and her ex-husband Alan Sawyer. 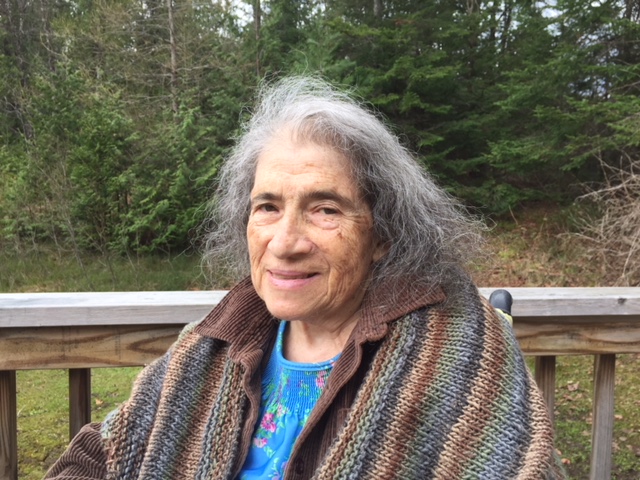 An in-person celebration is planned for the spring of 2022, pending the end of coronavirus restrictions. In lieu of flowers, please make donations to the Phyllis Rachel Larrabee Foundation c/o Judi Blakely, 69 Joy Drive – Unit G3, South Burlington, VT 05403. Or support our GoFundMe to help us publish her current poetry posthumously: https://gofund.me/ce01f0bb. You can learn more about Phyllis’ work at: https://phillabee.wordpress.com/