Born October 22, 1958 to John D & Jean F Sherman of Chicago Illinois who's entire family of five children and parents moved to Vermont in the early 1960s settling in Waitsfield.

In 1996 or so John would meet his future wife Natalie Jaubert of Stowe Vermont and after a long and steady courtship were (finally) married on the rooftop of the Hotel Denali on the Grand Canal in Venice Italy. Why he waited so long no one knew.

Natalie Jaubert Sherman was the love of his life and John could not have made it this far without her often joked that when they argued like George's parents on Seinfeld they always snapped right back and knew it was something minor and it was known that love had no bounds and would retire each night with a smile and a kiss. He simply adored Natalie and will always be grateful for the privilege & honor to call her his wife. She was his rock and he her pebble.

John attended high school in Plymouth England in the 1970s and after attending Johnson State College and The University of Vermont he worked for the largest coin-operated laundry leasing company in the United States and eventually moved back to Vermont in 1994 to begin a entirely new chapter in his life as an Financial Advisor for Edward Jones Investments. John's career spanned some 27 years at Edward Jones and was the most exciting and challenging choice he ever made. Zero regrets. His fellow Jones companion, Robert J Slein, his roomie in St Louis during first week of the firm’s training, became his storied rock of a personal friend and guiding beacon for almost three decades.

John would later state it was the greatest challenge in his career to help people get to where they needed to go and he loved almost every minute of it though at times he really wanted to chuck it all and escape somewhere with his Natalie! His single greatest achievement was to see it through to the end, and that he did.

Many who knew him, knew him as very fiscal conservative but a social liberal and certainly no Republican. John enjoyed media. He very much enjoyed listening to podcasts, Jonathon Goldberg NPR , Harry Shearer’s “Le Show”, and Maureen Dowd bulldog columnist extraordinaire for The New York Times. John was rarely seen without a Wall Street Journal or Barron’s.

He liked Autobiographies, recently enjoying Seymour M. Hersh and the great Norman Lear, creator of All in the family who is now more than 100 years old.

When asked about his biggest passions, it was his work that made him the happiest but he did have other interests including music and movies, politics and cool cars and great designs in just about anything! John recently has been enjoying Jean-Michel Basquiat who sadly died at the too young age of 27, an Extraordinary Artist.

His one puzzlement was why the world was so hell-bent on war and self-destruction and often thought how fantastic life could have been had all that energy been applied for the good of humanity and all mankind.

This is all true because he believes one should write one’s own Obit.

Please visit John's memorial website <link> to learn more about his exceptional life, to share your experiences and to obtain details (as they develop) on his Celebration of Life, which will be held in late Spring/early Summer. Also, a scholarship in John's name is being formed and details, as they develop, will be found at the memorial website. 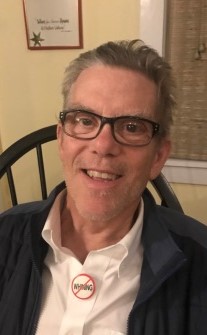