Mary Lou grew up on the family dairy farm on Holland Road in East Dover. She attended a one-room school house in East Dover through eighth grade. Later she attended Wilmington High School, graduating as class salutatorian in 1959. Following high school, she worked in a variety of jobs, including as a milk tester for dairy farms around southern Vermont.

In the mid-1970s she began a career in Dover town government, starting as an auditor, secretary and assistant town clerk.  In 1979 she ran for town treasurer, and seven years later after Virginia Carruthers' retirement she became the town clerk and treasurer. She retired as town clerk in 2007 having served the town for 30 years.   Not completely done with town duties, in 2007 she was elected as First Constable and collector of delinquent taxes, a part-time position she held until 2015.

Mary Lou was active in the Vermont Coalition of Municipalities during the initial fight against the implementation of Act 60. That included withholding town tax payments to the state education fund and a court case that eventually went to the State Supreme Court, where the law was upheld.

She knew many people through her work in town government. One of her most cherished friendships was with former secretary of state and governor, Jim Douglas. Aside from government, they shared a love for Vermont history and would often cross paths at events around the state. She loved to tell the story about him passing her on the interstate and waving from the governor's official vehicle.

Mary Lou felt that chronicling history was so important and she took it seriously.  As town clerk she took great pride in designing the annual Town Report for Dover.  Often the cover was an original drawing by Mary Lou.  She won multiple awards for her efforts in producing them, and continued compiling them for the town even after her retirement. She was also a driving force in the planning and execution of the Dover bicentennial celebration in 2010.

Mary Lou had vast interests and hobbies. She was a talented artist working with acrylics and oil on canvas, wood cutouts, and natural mediums, focusing on rural landscapes and local scenes. She built numerous replica doll houses and loved photography and videography (much to her family's amusement at holiday gatherings).

She loved to dance to country music and loved dancing with Jim.  Together they would turn many heads on the dance floor.

Mary Lou and Jim stayed true to their agricultural roots, raising heifers, mowing fields, baling hay, and continuing to work the family homestead well into their 70’s.  Mary Lou enjoyed gardening, canning, baking, crocheting, and sewing, including designing clothing for her daughters and their Barbie dolls. She could be found late in the evening at her sewing machine.

Jim and Mary Lou loved to travel, taking trips all over the United States and Europe. She also liked sports and could be seen rooting for her children and grandchildren at games. She was a fixture with her husband at Dover youth sports, and Wilmington and Twin Valley high school games. She was also a big fan of professional bull riding and traveled to New York City for competitions.

She was intelligent, hardworking, and fierce. She would tell you what she thought, whether you wanted to know or not.  She was always moving, making every hour count.  She touched many things in life and everything she touched was made better.  No one was angrier than Mary Lou when she was diagnosed with memory loss.  It seemed unfair for someone who had been so dynamic and talented.

Mary Lou was born on June 16, 1940 to William A. Holland and Dorothy C. Holland.  She married James "Jim" Raymo  on July 9, 1960 and they raised their three daughters.  Mary Lou and Jim were married for 60 years living all but the first year in their Holland Road home that she designed. She was preceded in death by her parents, her husband, and her younger brother Ray Holland. She is survived by daughters Victoria and husband Randy Capitani, of Dover, Michelle and husband Larry Mann, of Wilmington, and Janet Sherman and partner Richard Sprague, of Searsburg.  Also surviving are in-laws Linda Holland, Diane Raymo, Jane and Bart Raymo, and Isabelle and Steve Rice; grandchildren James Sprague and wife Sarah, William Capitani, and Wesley Capitani; great-grandchildren Taylor and Brayden Sprague; many cousins. 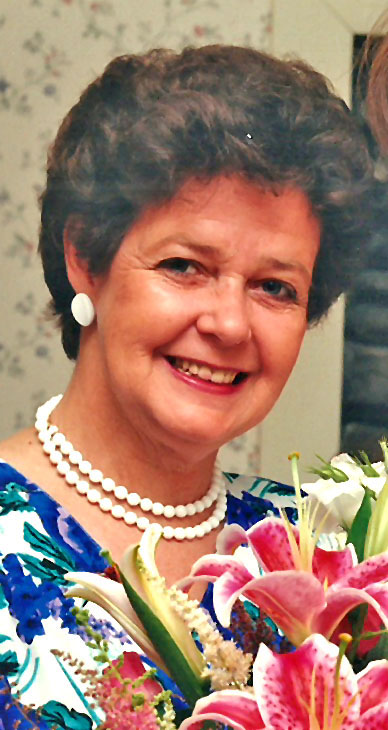 A memorial service is planned for Saturday, July 16, at 11 am at the Dover Center Cemetery, 22 Holland Road. A reception will follow. Memorial contributions in Mary Lou's name can be sent to the Dover Center Cemetery Association, PO Box 249, West Dover, VT 05356 or the Daughters of the American Revolution, Brattleboro Chapter, c/o Jayne Rivers, 173 Country Hill, Brattleboro, VT 05301.