Bryce M. Bludevich, M.D., 32, passed from this world to the next on Saturday, June 25th, 2022 surrounded by her loving husband, Nicholas Jessee, her parents and her sister in the sweet Vermont air at the McClure Miller Respite House.

Born at the Medical Center Hospital of Vermont on August 28, 1989 to Jacqueline Murphy and Zafir Bludevich, she was raised in Colchester, where her inquisitiveness, rambunctious spirit, and competitive nature were nourished by her time in the Colchester schools, as well as on the athletic fields and the Nordic ski trails. Her participation in the Far Post Soccer Club as both a player and a coach helped cultivate her soccer and leadership skills from a young age. She also developed her passion for the speed and fun of alpine skiing at an early age on the slopes of Smugglers Notch.

Bryce graduated as the Salutatorian from Colchester High School, and attended Smith College in Northampton, MA, where she left her mark both in the classroom and on the soccer pitch.  After graduating Phi Beta Kappa from Smith College, she lived in Cambridge, MA while working in a research lab at Children’s Hospital in Boston. It was during that time that she met Nick, who would become the love of her life, though it would take a few years of friendship before they both came to that realization.

Despite her young age at the time of her passing, Bryce’s dedication drove her to accomplish more than many achieve in much longer lifetimes. Her adventurous spirit and desire to learn about different cultures was piqued by the Governor’s Institute on Asian Studies program while in high school, traveling to China with that program. This experience instilled a life-long interest in Asian cultures and prompted her to minor in Chinese language in college. While at Smith she studied abroad in China on two occasions, combining her interest in Asian culture and medicine with the study of traditional Chinese medicine.

One of the happiest days of her life was when she was admitted to University of Vermont College of Medicine (Larner College of Medicine). While at UVM COM Bryce again set her sights on excelling both inside and outside the classroom, actively participating in her class and other COM activities and serving as a 2017 Class Agent when she graduated. Her voracious interest in all things international continued to grow, culminating with her participation in the UVM COM Global Health Initiative with study and service in Russia and Uganda.

Ultimately, she chose to pursue a career in surgery, and matched with the surgical residency program at University of Massachusetts Memorial Medical Center in Worcester, MA. In addition to the grueling medical residency schedule, she found time to cultivate deep and beautiful friendships with her co-residents, bake cookies and brownies for her co-workers, support and facilitate the formation of a residents’ labor union, and assist with the recruitment, orientation, and transition of new surgical residents into the program. In recognition of these efforts, she received the Resident Leadership award in 2021, and accomplished all of this while courageously going through countless melanoma treatments.

While her last three years were focused on research, she was eager to return to the hospital to complete her surgical residency in July. Sadly, that was not to be as she returned, instead, as a patient. Through her stay as a patient at UMASS Memorial Surgical Intensive Care, we, her family, learned about the incredible impact she had on all the people around her, and for that we are grateful. We are also thankful for the loving care she received from everyone in the UMASS SICU. She was special to us, and we will miss her deeply, but we will forever remember the impacts, large and small, she had on others.

Bryce is survived by her husband, Nick Jessee, her parents Jacki Murphy and Zaf Bludevich, her loving sister Zoë Bludevich and soon to be brother-in-law Ryan Martin. She is also survived by her animal family: Amelia & Nellie (kittens) and Ruthie (RBG) & Benji (dogs). In addition, she is survived by loving aunts and uncles and cousins: Jane Murphy (Mike Cadwell) Judy (Frank) Serafino, John (Jennifer) Murphy, and very special aunt, Mary Murphy as well as cousins Gus, Murphy, Tessa (Taylor) and Cash. In addition, she is survived by her uncle Zivko Blude, her aunt Margie Bludevich and cousins Kris (Joe) Conlan, Amy (Chris) Cathey, Jeff (Melanie) Blude, George and Ted Bludevich. Also left behind are her in-laws, Nancy Wainwright and Steve McKeever and Jeff Jessee and Karin Schaff, and sister-in-law Morgan (Mary). She is survived by too many friends to mention, but a special thanks goes to her lifelong best friend Lizzie Yasewicz and her family for being there for her every step of the way. 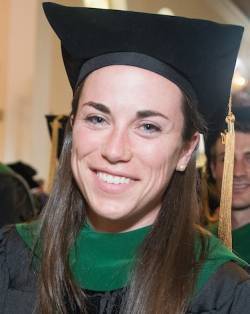 Calling hours will be held at the Hoehl Welcome Center on the campus of Saint Michael’s College, One Winooski Park, Colchester, VT from 5:00 p.m. to 8:00 p.m. on Friday, July 22, 2022 and funeral service will take place at the Chapel of Saint Michael the Archangel on Saturday, July 23, 2022 at 1:00 p.m. with a reception to follow at the Welcome Center.

In lieu of Flowers and to honor her memory, please consider a donation to the Bryce Bludevich Memorial Fund at the Larner College of Medicine (https://go.uvm.edu/bryce).

Honored to be serving Bryce’s family is the Heald Funeral Home, where messages of condolence are welcome at www.healdfuneralhome.com.