Andrew (“Andy”, “Sarge”) Sargeant passed away at home on July 1st, 2022. A beloved husband, an adored father, and a great friend, Andy was exceedingly kind and level-headed, traits he will be remembered for by all who knew him.

He was born on December 29th, 1953 in Lincolnshire, England. He was steadfastly loyal to his hometown football (soccer) team, the Lincoln Imps, who were perennial underdogs that he rooted for all his life.

Andy was a lifelong athlete. He was an avid soccer player from his school days well into his forties.  He also gave so much back to the sport he loved by coaching his sons’ soccer teams 3 seasons a year and then moved on to refereeing long after they graduated high school. He was a runner for many years and was proud to have completed Bermuda’s May 24th half marathon. Other sports he enjoyed were, tennis, working out in the gym, hot yoga and pickle ball. In his down time, he was a huge fan of tennis, English and World Cup Soccer, and Formula 1 racing.

Andy had many interests beyond sports. He loved going to the cinema, reading books, visiting art museums, and attending to concerts. He was always ready to travel hours to support any band that interested him, famous or unknown. His personal playlists were sought after, and he was constantly tapped to play DJ for the night. Some of his favorite artists were the Cure, Radiohead, David Bowie, Neil Young and Bruce Springsteen.

Andy loved to explore the world, which brought him to live in diverse places including Lesotho, Bermuda, Vermont, and Florida. Upon his arrival to Bermuda he met many life-long friends starting with the Bermudiana Staff Club that are still connected.

A few years later he met the lifelong love of his life, Isabelle. They opened Fish & Clips, a clever pet store. While Isy ran the store, Andy kept his day job as an accountant, which took the family to Vermont, their home for 25 years.

Andy spent the rest of his career as an executive at USA Risk Management, becoming that rarest of things: a treasured and much-loved boss. He was famous at the office for handling the role of Santa during the annual holiday party. Likewise, his April Fool’s pranks were legendary; his personal favorite was when he sent a company-wide email announcing a songwriting competition where the winning entry would be recorded by Paul McCartney as the new company theme song. He received at least two genuine submissions, which proves a good British accent can get you anything.

What Andy treasured most were his connections with others: family, colleagues, neighbors, life-long buddies and his “girls”, a lucky group of Isy’s single friends who were always welcome in Andy’s world as well as her nursing school friends, Set C, at which for many of their reunions Andy was the only husband and happily accommodated the role of only man.

He leaves behind his beautiful wife of more than 36 years, Isabelle (née McNiven), his mother Connie Sargeant, his adored sons Daniel (married to Jen Memmolo), Alex (married to Margie Mendoza Mabaylan), and Liam, special cousin Bernard in Australia, family and many dear friends all over the world.

In lieu of flowers, donations in Andy’s memory can be sent to VTDigger, the Vermont Kidney Association, or Vermont Public Radio, which he listened to even after moving to Florida in 2018. 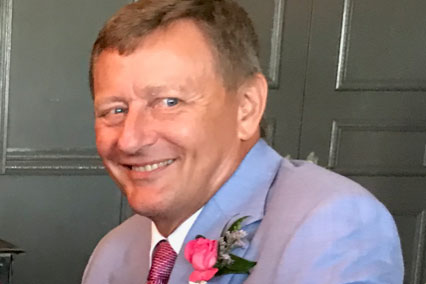