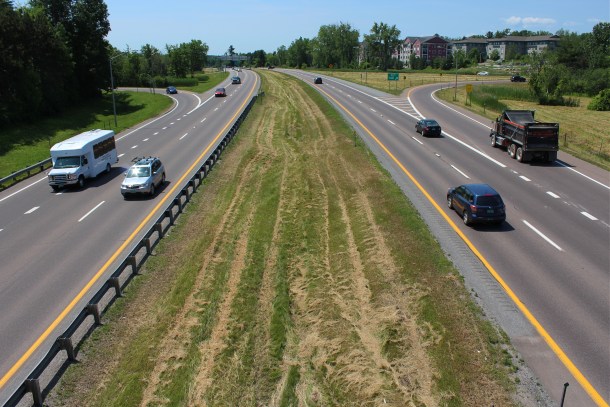 Interstate 89 as seen from the Route 2 bridge joining Burlington and South Burlington. Photo by Alexandre Silberman/VTDigger

[V]ermont’s population is stagnating. And one major reason is that residents keep leaving.

Lawmakers have tried to attract new workers with a high-profile strategy: offering a cash incentive for people to move to Vermont. The incentive is for people who earn considerably more than minimum wage.

But recent research from the Legislature suggests that it’s working-class and middle-class residents that Vermont is at risk of losing. By proportion, only a small number of wealthier households come to Vermont.

“Blue collar workers, those with low and moderate incomes … have decided to move away from Vermont,” Gov. Phil Scott said at a press conference Thursday.

According to the Joint Fiscal Office report, Vermont lost thousands of people with incomes of under $100,000 a year. Outward migration was particularly high among 45- to 64-year-olds earning $25,000 to $75,000.

“I constantly hear stories in committee and on the floor of the Senate that we’re pushing wealthier people out,” said Sen. Anthony Pollina, P/D-Washington. “In reality, the opposite is true.”

Migration data can be rather limited because it’s hard for researchers to track people as they move from one state to another. The IRS does it by comparing where people live from one year to the next on Form 1040 tax returns. Although that doesn’t capture every taxpayer — some earn too little to file — it gives a snapshot of residents’ movement across states.

In general, Vermont lost the most people to the Southeast and the West, along with Florida, Maine and New Hampshire. It gained the most people from New York and other states in the Northeast. Vermont ranks 20th in the nation in the percentage of its population lost to domestic outmigration.

These trends aren’t unique to Vermont; Florida gained residents from throughout New England. Meanwhile, native New Yorkers and New Jersey residents are moving all over the country (though both states’ population numbers are buoyed by international immigration).

The IRS doesn’t give data on the age of those moving to Florida, and it doesn’t track part-timers who move to another state but spend part of their year in Vermont.

Vermont’s wealthy new arrivals tend to be on the younger side, between 26 and 44, with incomes over $200,000 a year — including both single and joint filers.

High earners moving here saw their incomes decline 22% on average the year after the move, according to the JFO. That could be because they’re cashing out an asset, like a mortgage, or it could be due to Vermont’s relatively low income compared to Northeast states.

Sen. Randy Brock, R-Franklin, said he believed wealthy out-migrants were underreported because they tended to leave before a major windfall. He pointed to examples of accounting firms that help high-income Vermonters plan their leave.

But Brock, a retired vice president of Fidelity Investments, said even ordinary Vermonters could be feeling the brunt of Vermont tax bills and energy costs.

“I’ve heard people say that their money will go further elsewhere, and they won’t have to plow snow,” he said.

Scott, who has made affordability a central part of his agenda, said he hears concerns from Vermonters about the costs of living in the state.

Where did you come from, why did you go?

For politicians’ oft-cited reasons that Vermonters are leaving — taxes and jobs — the evidence is not so clear. Many of the places Vermonters are moving to do have a lower tax burden and better job growth, but there are exceptions.

The reasons people leave are often complicated and multifaceted, said Cheryl Morse, a geography professor at the University of Vermont.

“When you ask ‘why do you live where you live,’ you find people are not robots,” she said. “It’s a really emotional process.”

Morse and her colleague Jill Mudgett, a Vermont historian, sent out a survey to Facebook friends asking current and former Vermonters why they decided to leave or stay. They received nearly 3,700 responses from across the country and abroad.

Former Vermonters’ responses were scattered across the spectrum, from jobs and income to diversity and the desire to live in an urban area, Morse said. Some moved because of the weather.

But among those who stayed, the consensus was clear: More than two-thirds cited their attachment to Vermont’s natural landscape. More than half cited the state’s culture and community, and many cited family as well, although women were more likely to stay for family than men.

“Most migration literature looks at economic and family factors, so this was really something,” Morse said.

Morse has presented her findings to government agencies. She said while she’s found them “receptive,” they sometimes can’t get over their own experiences or their friends’ experiences of leaving or staying in Vermont.

“Their experience isn’t the dominant story of all Vermonters,” she said.

Thanks for reporting an error with the story, "People are leaving VT in droves. Where are they going?"