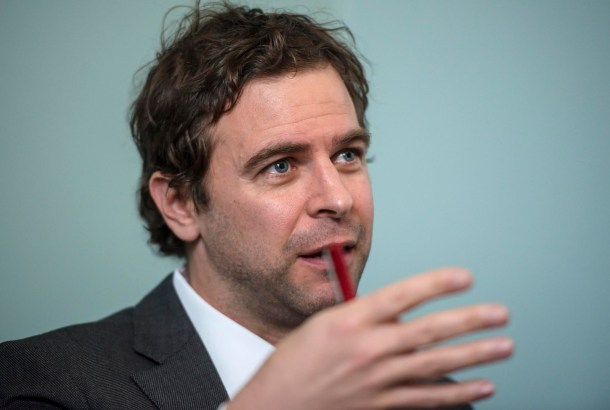 Senate President Pro Tempore Tim Ashe, D/P-Chittenden, speaks with members of the media at the Statehouse in Montpelier on Wednesday, Feb. 20, 2019. File photo by Glenn Russell/VTDigger

On July 10, Fitch Ratings announced it had downgraded Vermont’s sterling AAA bond rating to its second highest level — AA+ — citing the state’s demographic challenges and labor force, which has been “flat to declining” over the last decade.

At a meeting of the Joint Fiscal Committee on Monday, the leader of the Vermont Senate and its top budget writer blasted the agencies for applying narrow standards to all states when they calculate bond ratings.

“I feel like our governance is really at risk at this point with the way the rating agencies apply a single set of measures across all types of states who have different needs,” said Senate President Pro Tem Tim Ashe, D/P Chittenden.

“We're getting hammered on demographics and we're predominantly a rural state,” said Sen. Jane Kitchel, D-Caledonia, who chairs the Senate Appropriations Committee. “It just seems like it puts rural states at a disadvantage in how our financial house is rated.”

Ashe said that rating agencies don’t give Vermont enough recognition for the investments it has made, including its funding of federally-mandated efforts to clean up its waterways.

“I find the way the rating agencies judge state performance to be horrible in a lot of ways,” he said. “For instance, states that they would apply their measures to have huge poverty rates, ignore the environment, have terrible education systems.”

“We in a sense are constrained and punished for proactively addressing what are effectively public problems.”

Ashe added that the fear of taking on more debt, which could lead to downgrades from agencies, may be preventing the state from making investments that could attract new residents and boost the economy.

He mentioned the Senate’s effort in March to invest in a new $50 million housing bond that could yield hundreds of affordable housing units. The initiative was opposed by many, including Vermont Treasurer Beth Pearce, who feared the debt needed to fund the project could lead to another rating drop.

“The very things that are prerequisites to succeeding and turning some of these corners in a more robust way are being taken out of our hands before we can even use them,” Ashe said.

In a statement, Eric Kim, Fitch’s lead analyst for Vermont, said the agency “rates to its criteria which is applicable to all state and local governments in the US in the same way.”

“Economic resource base analysis, including demographic trends, are an important part of our rating process and provide the foundation for our assessments of the key rating drivers,” he wrote.

In its most recent report on Vermont, Moody’s said it was keeping the state’s rating at an Aa1, and also highlighted the state’s struggling demographics.

The report states that for the last decade Vermont has lagged the entire nation and northeast region in job creation, which is “largely a consequence of the state's slowly growing and aging population.”

But David Jacobson, a spokesperson for Moody’s, stressed that the rating agency considers many other factors like personal income growth, and debt when issuing its ratings.

David Coates, a retired managing partner at KPMG-Vermont, who used to represent Vermont in meetings with rating agencies, says agencies have some bias against small states, though he understands why fiscal analysts would look at Vermont and see risk.

“There is some prejudice out there with a small state like ours, particularly when we have a population that’s not growing,” Coates said. “But saying that, I think we were lucky to keep the AAA as long as we did.”

With its massive teacher pension liabilities, and a slow rate of personal income growth that has fallen behind other small states around the country, he sees why the state has faced downgrades.

“As much as I love the state of Vermont… I just don’t see that bright a future.”

But he thinks rating agencies tend to view small states as particularly sensitive to small changes and shifts in the economy. And like Ashe suggested, he said they don’t pay attention to all statewide policy changes.

“There are some good things that we do that we don’t get credit for,” he said.

Thanks for reporting an error with the story, "Senate leaders blast rating agencies after bond rating downgrades"