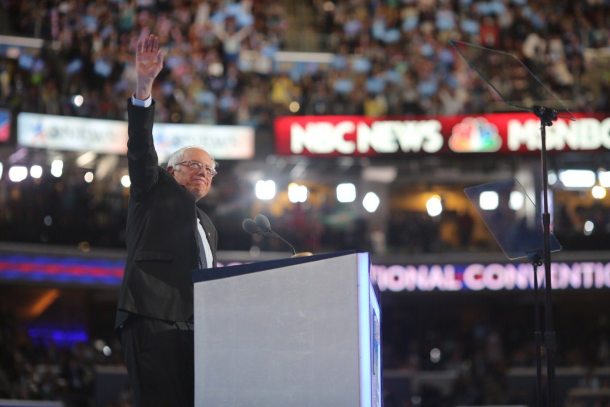 Bernie Sanders caps his 2016 presidential campaign in July at the Democratic National Convention in Philadelphia. He offered this photo on his Twitter feed.

[B]ernie Sanders’ new book “Our Revolution” spans 464 pages, but the author sums up his take on presidential politics in two sentences.

“What a strange and unprecedented campaign,” Vermont’s junior U.S. senator writes. “Hillary Clinton, the candidate whom the pundits had determined was the odds-on favorite, the candidate who had been anointed by the entire establishment, was winning, but at the same time was losing state after state by huge margins.”

One might assume Sanders is referring to last week’s election-night coverage, when Clinton led Donald Trump in the popular vote yet fell further and further behind in the Electoral College. But the author instead is recalling March 26, when he scored landslide victories in all three of that day’s Democratic presidential caucuses yet ultimately failed to secure the party’s nomination.

“When we began our race for the presidency in April 2015, we were considered by the political establishment and the media to be a ‘fringe’ campaign, something not to be taken seriously,” he continues. “When our campaign finally came to a close in July 2016, it turned out that the pundits had got it wrong — big-time.”

“‘Our Revolution’ will be an inside account of this extraordinary campaign, and will also provide a blueprint for future political action,” New York publishing powerhouse Macmillan said in an announcement over the summer. “Its message: the fight has just begun.”

Macmillan’s imprint Thomas Dunne Books has worked to keep the contents under wraps until its 300,000-copy first edition release Tuesday. But a hardcover obtained by VTDigger shows the book — already skyrocketing to the top of Amazon.com’s best-seller list — to be one-third 2016 campaign memoir and two-thirds confirmation why its author isn’t ruling out another presidential run in 2020. 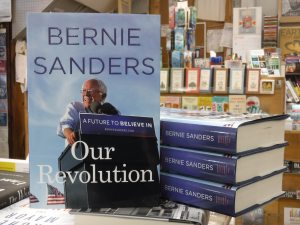 Bernie Sanders’ new book “Our Revolution,” which will appear on bookstore shelves Tuesday, is skyrocketing to the top of Amazon.com’s best-seller list. Photo by Kevin O’Connor/VTDigger

“This book describes the history-making campaign that we ran,” Sanders writes in the introduction. “But more important, it looks to the future. It lays out a new path for America based on principles of economic, social, racial, and environmental justice. On behalf of our children and grandchildren, it is a path that must be followed and a fight that must be won.”

The first 40 pages — with chapters titled “How Do We Turn Out the Way We Do?” and “My Political Life in Vermont” — encapsulate Sanders’ biography from his birth in Brooklyn in 1941 to his arrival in the Green Mountains in 1964 and establishment-defying elections as mayor of Burlington in 1981, congressman in 1990 and U.S. senator in 2006.

“Going to Boy Scout camp changed my life,” the author writes. “It turned out that I really liked country living, and I never forgot that. I doubt very much that I would have ended up in Vermont, one of the most rural states in the country, if I hadn’t gone to Scout camp.”

The next 130 pages chronicle the 2016 presidential campaign in chapters ranging from “Thinking About Running” to “On the Campaign Trail.”

“Over and over again I had expressed the view that Vermont was not some kind of isolated fortress for progressive ideas and that, if properly presented, there was a nationwide audience that would be receptive to the views we held,” Sanders writes. “I was especially curious as to how these ideas would play in other rural states, states that Democrats often did poorly in.”

Sanders recalls “exploratory” trips to Alabama, Georgia, Mississippi and South Carolina in 2013 and 2014.

“How do we get white working-class Americans to stop voting against their own best interests?” he writes. “The lesson I learned from that first trip was that even in the most conservative part of America, the Deep South, there were many people, black and white, who were sick and tired of the economic and political status quo.”

But could a self-described democratic socialist from one of the nation’s smallest states win its biggest office?

“My mind went back to Burlington, Vermont, and 1981,” he writes. “It all sounded familiar. Nobody then thought that the city’s political and economic establishment could be beaten. They were just too powerful. Nobody thought that we could put together the kind of coalition that we did. Nobody, absolutely nobody, thought we could win that election. But we did.”

Sanders notes that he ultimately decided to seek the Democratic nomination over breakfast with his wife at Denny’s restaurant in South Burlington.

“A man came over to our table and movingly thanked me for the work that my office had done for him in gaining his veterans’ benefits,” he writes. “Our efforts had changed his life. He urged me to run for president. Jane started crying. She now knew what we had to do.”

Sanders recalls one other detail about that day: “Their blueberry pancakes are especially good.” The tidbit is newsworthy if only because the rest of the book features more of his signature rants (“Why is it that the mainstream media sees politics as entertainment, and largely ignores the major crises facing our country?”) than personal revelations.

The author, for example, doesn’t give People magazine much to report in his section on “Celebrity Support.”

“There are many celebrities who simply enjoy the glow of fame and fortune,” the author writes. “The people who participated in our campaign, however, used their name recognition and popularity to educate America about issues dear to their hearts and vitally important for the future of our country: poverty, racism, climate change and the environment, immigration reform, voter suppression, peace, and many other issues.”

As for the bird that sparked a social media storm after landing on Sanders’ lectern in Portland, Oregon? It merits only a photo.

The curmudgeonly caricature of him on “Saturday Night Live”? It rates a short mention: “My impersonator Larry David did Bernie Sanders better than I did.”

The candidate’s transatlantic trip to meet Pope Francis? He recounts it in three sentences: “While at the Vatican, Jane and I had the opportunity to briefly chat with the pope, a true honor. We spent the night in the building where the pope lived. In separate rooms, as was required.”

And Sanders’ debate comment to Clinton that “the American people are sick and tired of hearing about your damn emails”? He simply notes the resulting press frenzy didn’t report the rest of his statement.

(For the record: “I go around the country, talk to a whole lot of people. The middle class of this country is collapsing. We have 27 million people living in poverty. We have massive wealth and income inequality. Our trade policies have cost us millions of decent jobs. The American people want to know whether we’re going to have a democracy or an oligarchy as a result of Citizens United. Enough of the emails. Let’s talk about the real issues facing America.”)

With all those superfluous memories out of the way, Sanders devotes the remaining 265 pages to “An Agenda for a New America: How We Transform Our Country,” with separate chapters on “Defeating Oligarchy,” “The Decline of the American Middle Class,” “Ending a Rigged Economy,” “Health Care for All,” “Making Higher Education Affordable,” “Combating Climate Change,” “Real Criminal Justice Reform,” “Immigration Reform Now,” “Protecting Our Most Vulnerable” and “Corporate Media and the Threat to Our Democracy.”

“I was gently faulted by some for having excessive ‘message discipline,’” he writes in the latter chapter, “for spending too much time discussing real issues. Boring. Not what a successful modern campaign was about.”

That said, Sanders already has sold out the Burlington and Manchester stops of his cross-country book tour (he’s also set to appear at Montpelier’s Bear Pond Books on Nov. 22). And readers are pre-ordering so many copies for $27 — the same figure as his average campaign contribution — the book cracked Amazon.com’s top 100 best-sellers list Saturday and climbed to No. 3 on Sunday.

“I hope very much that my campaign for president will not be endlessly discussed from an historical perspective, looking back,” Sanders concludes his book. “I hope that my efforts, and the incredibly hard work of hundreds of thousands of grassroots volunteers in every state in our country, will be seen as a turning point in American politics and a blueprint for the future.”

Thanks for reporting an error with the story, "Sanders’ book ‘Our Revolution’ arriving with new significance"