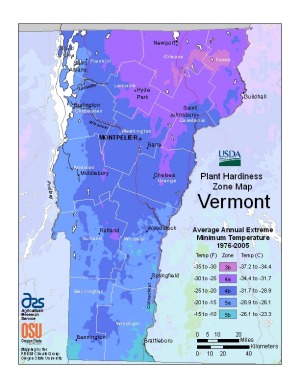 A recently updated version of the USDA Plant Hardiness Zone Map provides strong evidence that some areas of Vermont have warmed since the map was last produced in 1990. Such a trend could have major implications for how Vermonters farm in the future.

The map, which divides the U.S. into zones based on an area’s annual coldest temperature, shows that much of Vermont has shifted into warmer hardiness zones. Also, researchers enlisted new technology to provide a more nuanced picture of the many microclimates in the state. The hardiness map is used by growers to help determine what to plant and by crop insurers to help determine policy.

Overall, the map shows a four to five degree warming trend across the nation in comparison to the 1990 map. Much of the country shifted into new hardiness zones, but Vermont has a more complicated zone layout than most states because of its variations in elevation. Still, the new Vermont map shows an unmistakable warming trend, including the first appearance in the state of zone 5b (-15 degrees to -10 degrees Fahrenheit) in the extreme southeast and southwest of the state. Also, the area encompassing the previous warmest zone, which before had stopped just north of Rutland, now runs all the way up to the northwest corner of the state. Meanwhile, the territory of the coldest zone, 3b (-35 degrees to -30 degrees Fahrenheit), has shrunk from most of the Northeast Kingdom to a few pockets of territory in Essex and Orleans counties.

It’s impossible not to think about climate change when looking at the 1990 and 2012 maps side by side, said David Wolfe, a soils and crops scientist at Cornell University.

“This is a real phenomenon and I think [the new map] kind of de-politicizes the whole story,” Wolfe said.

But it may be easy to assume the warming trend is happening faster than it really is by examining the differences between the two maps, said Chris Daly, an engineering professor at Oregon State University and director of the PRISM Climate Group, which created the map in conjunction with the USDA. The 1990 map reflected an usual cold spell in the '70s, and it also inexplicably encompassed a shorter timespan than previous maps, which usually encompass 30 years of data. Climate change is happening, Daly said, but there is no evidence to believe the next map will show as high of a spike in temperatures.

“We’d all be toast,” Daly said. “It’s obviously not going to happen that quickly.”

The map averages a region’s coldest annual temperature by using data collected from weather stations. But the weather data often has been too incomplete to create more than a broad picture of temperatures in a region, said Jan Curtis, a climatologist for the National Water and Climate Center.

“You’d need millions of stations across the nation. Obviously, we didn’t have that,” said Curtis, who helped evaluate the PRISM model.

“These climate maps used to be hand-drawn,” he says. “You’d get something different every time you did it.”

For the current map, researchers combined recorded data with computer models that can predict what effect elevation and proximity to the coast might have on temperatures. The result is a map showing more zone diversity, including pockets of cooler temperatures in small microclimates a few miles west of both Rutland and Middlebury.

The new map is already garnering positive reviews in the growing community for being more user-friendly and more accurate than previous maps. For the first time, growers can go online and click a region on the map or enter a zip code to get a close look at local hardiness zones.

But neither Daly nor Wolfe believe it will greatly change what farmers plant because many growers already have been betting against the previous USDA map for some time. In New York, according to Wolfe, entrepreneurs began growing European wine grapes that need milder temperatures than the region was zoned for; these grape growers bet correctly that the local climate would continue to warm enough to sustain them. And soybean production has increased in northern New York from 40,000 acres to 250,000 acres in recent years, which has only been possible with the new trend of warmer temperatures.

“People have been engaging in what has been known as ‘zone-denial’ for such a long time,” says Daly. “The map has really been more of a confirmation of what they know.”

But while Northeast farmers have been leaning on the promise of warmer weather for a longer growing season, they also must come to terms with some of the other effects of climate change. Lynda Prim, a fruit and vegetable technical advisor with the Northeast Organic Farming Association of Vermont, said many farmers learned difficult lessons with the massive flooding in 2011.

“We saw a lot of people be unprepared for a major event like [Hurricane] Irene,” Prim said.

“The zone is one thing, but you still have to look at the weather as fairly unsettled,” Prim said.

Another concern, said Wolfe, is that new weeds and pests have been moving north with the warmer weather. Farmers can look southward somewhat to see what’s coming, but they shouldn’t necessarily assume that an entire ecosystem will transfer north. Natural enemies of pests and invasive weeds may not make the trip, he said.

Wolfe and Prim both noted that the hardiness zone map is just one tool to predict weather patterns. It only looks at the extreme cold temperatures in a region. But it makes for a good yardstick of the changes that may come because extreme cold can be a game-changer.

“It only takes one or two super-cold nights to kill off a lot of insects or plants,” Wolfe said.

Craig Idlebrook is a freelance writer in New England.

Did you know VTDigger is a nonprofit?

Thanks for reporting an error with the story, "New hardiness zones show warming trend in Vermont"

Robert Letovsky: Looking at the big picture in energy options

Stephen Leslie: Where has all the water gone?

With Roe overturned, Vermont lawmakers are already looking to next steps to expand abortion access

It’s official: The results of Vermont’s primary are now certified

VTDigger launches general election debates with US Senate event in Manchester on Sept. 8