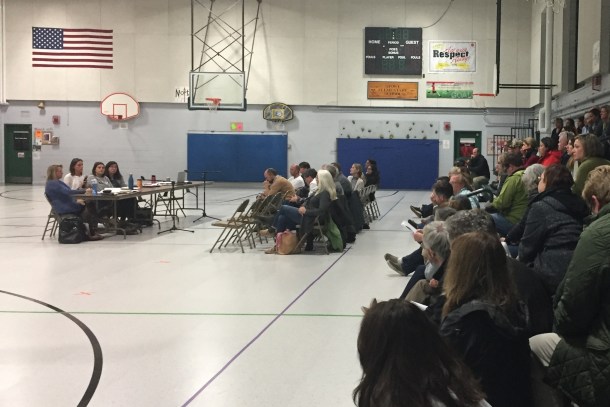 Stowe residents gather for an emergency school board meeting on Thursday. Photo by Lola Duffort/VTDigger

[A]t least a hundred residents packed the bleachers at Stowe Elementary on Thursday night for an emergency school board meeting following a tentative decision by the State Board of Education to merge Stowe with the neighboring Elmore-Morristown district under Act 46.

The state board has been meeting throughout the month to make provisional decisions on forced mergers under the consolidation law. A proposed statewide plan for mergers made by the Secretary of Education earlier this summer hadn't recommended Stowe be merged, and local school officials expressed shock at the State Board's decision.

“This decision took us all by surprise, and now we have to face the music,” school board chair Cara Zimmerman told the crowd.

The state board is tasked with making the final call on consolidations under the law, and has until November 30 to re-organize districts. It has so far made [provisional decisions on 41 of 43 alternative proposals] put forward by school boards asking for a reprieve under Act 46.

In most cases, the state board has taken their cues from the Secretary’s proposed plan, but in several notable instances it has departed from the recommendations made by then-interim secretary Heather Bouchey.

In Stowe’s case, the Secretary had argued that because Elmore and Morristown had already merged voluntarily – despite being ineligible for tax incentives – requiring them to merge once more would be counter-productive. 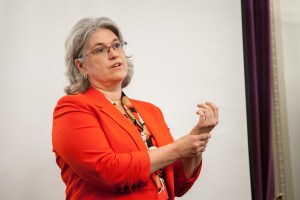 Bouchey wrote that it was a “difficult decision” but that the Agency of Education believed that Stowe and its neighbors were in an “entirely unique situation” in which a unified school district was unlikely to meet the goals of Act 46.

But state board members disagreed, arguing that the Elmore-Morristown merger had gone well and was evidence consolidation could be beneficial for the area. And several also noted that many districts recommended for merger had complained that Stowe appeared to be getting a pass.

Stowe school board members sought to reassure residents that students would remain where they were and that there were no plans to merge schools and intermingle Stowe and Morristown students, even if the two districts combined their school boards and budgets. But they also pledged to fight the merger, in court if necessary.

“I just want to make it very clear that we haven’t rolled over and died yet,” school board member Leigh Pelletier said.

Stowe school officials did make clear one option for fighting the merger – privatizing – was almost certainly off the table given the timeline. The state board is expected to finalize their decisions as soon as November 15, and unified districts are expected to be in place by July 1, 2019.

Residents, meanwhile, indicated they were spoiling for a fight. One audience member, David Jaqua, asked his peers to stand if they supported the board exploring legal means to block a merger.

“I think you have an army,” Jaqua told the school board when the entire room stood up. 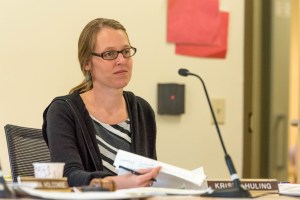 Krista Huling is chair of the State Board of Education. Photo by Bob LoCicero/VTDigger

A coalition of school officials from other communities facing forced mergers are preparing a lawsuit against the state, and organizers of the effort were in Stowe on Thursday. Twenty-one school districts have already indicated they plan to sue if they’re merged by the state, Bellows Falls Union High school board member David Clark told the crowd.

“I’m here tonight because I just want to find out if Stowe would have any interest in making common cause with the 21 schools – and counting – that will be going that route,” he said.

Stowe school board members made no commitments Thursday, but they indicated that a lawsuit was likely, either independently or together with the group of boards already organized to fight the mergers.

Stowe is one of the wealthiest communities in Vermont, while Elmore and Morristown, its proposed partners, are far less affluent. Several in the audience referenced the town’s failed fight against Act 60, the landmark Vermont law that equalized school funding in the late 90s, and said that defeat indicated Stowe could not fight the state alone.

“Stowe is perceived, outside of Stowe, not always great. I think personally, this is my own personal opinion, that we would be doing ourselves a grand disservice if we went it alone. I think we’d look a little bit stuck-up,” said John Pelletier.

The board is meeting for its regularly scheduled meeting on Monday, and then jointly with the Elmore-Morristown board on Thursday.

Lawmakers in towns seeing forced mergers have increasingly been discussing adding additional leniency into Act 46 in the next session. But attempts to create a legislative off-ramp to consolidation would likely meet resistance from Gov. Phil Scott if he wins re-election on Tuesday. His Democratic challenger, Christine Hallquist, has said Act 46 has gone far enough.

Scott said during an interview Friday that districts that had merged during the voluntary phases of Act 46 had gone through “a lot of turmoil and a lot of hard work.”

“For us to give the rest a free pass, I’m not sure that’s fair to the whole system,” he said. “I would lean no. I would be willing to listen, but I think you have to be consistent.”

If you want to keep tabs on Vermont's education news, sign up here to get a weekly email with all of VTDigger's reporting on higher education, early childhood programs and K-12 education policy.

Thanks for reporting an error with the story, "‘You have an army,’ resident says as Stowe preps to fight merger"