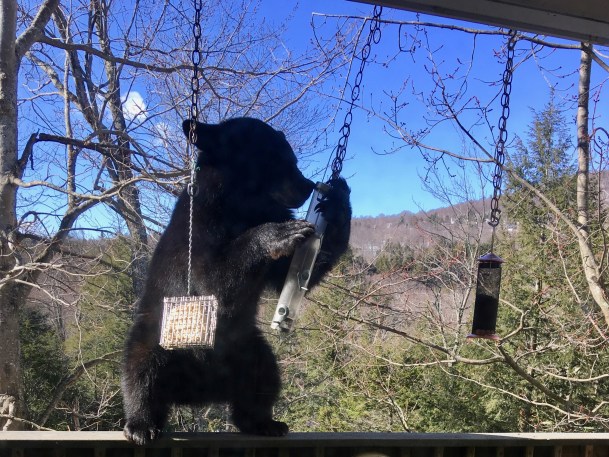 A young bear gets into a bird feeder. Photo by Mary Gow

[B]lack bears are coming out of their dens hungrier than normal this spring, which may lead to increased human-bear conflicts.

The state Department of Fish and Wildlife wants Vermonters to take extra precautions -- like putting away bird feeders and securing garbage -- to keep bears away from property.

Forrest Hammond, a wildlife biologist and black bear project leader with the department, said that bears went into their dens hungrier than normal last fall.

“Last year was just a particularly bad year for bears to put on weight,” he said.

Hammond said there was a delayed “green up” last year, followed by a drought at the end of the summer that made for poor eating. Last fall, there were fewer berries and apples than normal, he said. Hammond said that those food sources are cyclic, so it’s hard to point to one factor that caused low production last year.

“Even the nuts were in short supply,” he said. "We had a super abundance of squirrels.”

Hammond said the department had received “quite a few” calls this winter about sightings of orphaned cubs.

In the spring, bears climb ash and maple trees to eat buds and also munch on grasses and sedges, none of which provide much nutrition, said Hammond. The department has already received numerous calls this year about human-bear issues this year, which usually don’t start until late spring.

A game warden had to put down a bear last Saturday that had gotten into a sheep pen at a farm in Richmond and began killing sheep, according to Hammond. He said he received a call on Thursday about a similar situation in Moretown. In both cases, electric fencing was used to try to deter the bears, he said. The farmer in Moretown had removed sheep from the property with the aim of discouraging the bear from returning.

“Unfortunately with bears that begin killing livestock, they like it,” Hammond said.

The bear population has also been increasing in the long-term, though it has come down slightly in the past five years. The hunting season was lengthened slightly to try to keep the population within the department’s objective of between 4,500 and 6,000 bears, said Hammond.

Wildlife officials are asking residents to:
• Keep trash inside until the day of trash pick-up or use bear-proof canisters
•Take down bird feeders and remove outdoor pet food
• Use electric fencing to protect beehives, gardens and livestock
• Bury food scraps in compost heaps with dry leaves, straw or newspapers
• Lock doors and secure windows at night
• Keep away from bears

Under state law, it is illegal to feed bears or to kill bears without first taking extensive non-lethal measures and receiving authorization from a game warden. Aggressive bears or bears in residential areas should be reported to local game wardens or online.

Don't miss a thing. Sign up here to get VTDigger's weekly email on the energy industry and the environment.

Thanks for reporting an error with the story, "Bears hungrier than normal this spring, officials warn"